d. From a survey about affordable housing in a Massachusetts community:
​    Higher than single-family density is acceptable to make housing affordable.

e. From a survey of faculty experience with ethical problems in research:
Are you reasonably familiar with the codes of ethics of any of the following professional
associations 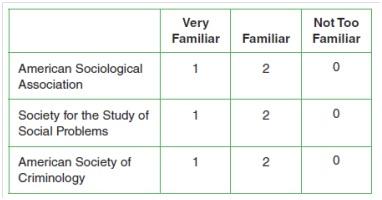 If you are familiar with any of the above codes of ethics, to what extent do you agree with them?

Some researchers have avoided using a professional code of ethics as a guide for the following reasons. Which responses, if any, best describe your reasons for not using all or any of parts of the codes?

F. From a survey of faculty perceptions:
Of the students you have observed while teaching college courses, please indicate the percentage who significantly improve their performance in the following areas.
Reading ____%
Organization ____%
Abstraction ____%