Compatible with all releases of SPSS (12.0 and later), the all-new Fifth Edition includes 53 new or revised exercises. Two new datasets (NES 2012 and GSS 2012) and two revised datasets (on the 50 states and on 167 countries of the world) feature an expanded number of variables to provide greater latitude for performing original analysis.

We gratefully acknowledge Philip H. Pollock for writing an excellent text and for developing the ancillaries on this site. 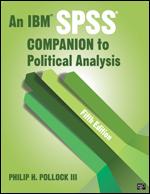