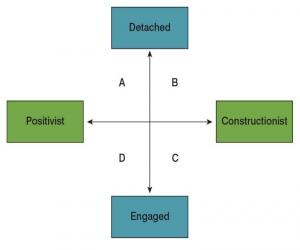 In order to illustrate how research has been conducted distinctly differently in each of the four quadrants, we examine research conducted by the Pay and Rewards Research Centre in the late 1970s and 1980s. At the time, many organisations in Britain were considering introducing self-financing productivity schemes. This involved changes to their wage payment systems and provided the Pay and Reward Research Centre at Strathclyde University with a unique opportunity to undertake large-scale comparative study. Members of the research centre conducted research on pay in such a way that over a ten-year period it covered all four of the quadrants of our matrix.

A good illustration of research conducted in quadrant A (detached and positivist) can be found in a large-scale research study involving 1040 questionnaires completed by over 320 managers, 58 shop stewards and 662 employees from some 63 organisations (Bowey et al., 1982, 1986). To supplement this data a further 438 semi-structured interviews were conducted and data collected from reports archival data collected from the companies. In addition follow-up questionnaires were completed 12 months later. Following an extensive review of the literature clear hypotheses were established in advance both from this previous research but also from the experience of the principal researchers within the team. When the semi structured interviews took place they followed an exact protocol so that information gleaned could be added into the dataset for subsequent computer analysis. Analysis was conducted using SPSS and an understanding of which incentive schemes were successful and why was drawn from this data. Correlations between a range of different ways of characterising the different incentive schemes implemented and indices developed by the team that indicated different kinds of ‘success’ organisations might declare. In addition, multivariate analysis was used in order to hold constant multiples of the contextual factors at the same time so as to test whether it was combinations (composites) of situational characteristics in relation to the schemes introduced that influenced the results of schemes acting together that produced the outcomes measured.

A good illustration of research conducted in quadrant B (detached and constructionist) were two in-depth qualitative case studies conducted following the large survey outlined above. These studies were both of a longitudinal in nature and involved researchers working closely with organisational members in order to come to a better understanding of the effects changes in payment systems had on performance. The idea of using a qualitative in-depth study to understand pay was not new. Donald Roy had undertaken covert participation studies in the early 1950s, the most influential being Quota Restriction and Gold Bricking in a Machine Shop (1952). Another researcher, Tom Lupton, who had trained as an industrial anthropologist, conducted a study in a participatory manner (although this time, not completely covertly – the work force knew that he was observing them but didn't know exactly what the aims and objectives of his research were). This research is written up in book form: On the Shop Floor.

The first of the two studies conducted by the team at the Pay and Reward Research Centre were designed along similar lines to the studies by Roy and Lupton. The researcher applied for a job as an employee in an engineering factory and worked alongside employees in the company in order to better understand how the incentive changed behaviour and impacted performance. The second study employed the method of diaries and was conducted in a coal mine over the course of three months. Diaries were distributed across the workforce, from management through to face workers. The diaries were posted to the team at Strathclyde on a weekly basis. In the diary, research participants wrote about their experiences of how the incentive scheme influenced their decisions and their work against some pre-defined themes. Both of these qualitative studies are written up in the team’s book of the research, Payment Systems and Productivity (Bowey et al., 1986). The contribution that these two in-depth studies made was considerable as they both gave additional insights into the behavioural influences and consequences of working under incentive conditions that could not have been gained by other means, for example from questionnaires. The diary study may be seen as crossing the boundary between engaged and detached research (between quadrants B and C). However, it is important to bear in mind that the research participants communicated with the researchers in an indirect and pre-structured way, and that their involvement in the research can therefore be judged as somewhat passive.

To illustrate research that exemplifies quadrants C and D (engaged and constructionist and engaged and positivist), where involvement with users, application and collaboration is a more dominant feature, we can once again turn to work undertaken by the team at the Pay and Reward Research Centre. One of the main findings from the research reported above was that there were contingent process factors (variables) that were found to be at play when introducing incentive schemes that led to some designs of scheme being more effective than others. One area where process played a part, and where collaboration with practitioners was found to be key, related to whether the senior management team in the organisation (i.e. those who were introducing the new scheme) were themselves clear about what constituted success for their organisation. The research team found more often than not that this was not the case and very often there were quite different views held (but not shared) held by members of the senior team as what aspects of the organisation needed improvement. Without researchers interviewing managers, uncovering contradictions and different perspectives of what were the key priories of the business, and if possible reconciling these, there seemed little chance (other than luck) that an incentive scheme could be designed to focus on those agreed key priorities. What the research in quadrants A and B showed was that in many organisations there was quite profound contradictions and disagreements within the senior team, which often meant that those schemes that were introduced were not consistent with the organisation's priorities for success. A second issue related to how the organisation could best measure these priorities once identified. What the research (quantitative as well as qualitative) showed was that it was essential for the workforce to be involved in the process of determining how best the identified priorities might best to be measured and what employees at all levels could do to improve them. Once that had been achieved, an incentive scheme could be selected (from the many available) or a new scheme designed which would more directly link these measures to a scheme that would link workforce effort and reward to these measures which in turn linked to the key objectives and priorities of the organisation.

In order to test the efficacy of this approach, a number of pilot projects were undertaken with companies. One was collaboration with a company in Scotland (Bowey et al., 1986). Another project involved forming an association with a consultancy company, Employment Relations Ltd. This consultancy company specialised in pay and reward systems. They build the Strathclyde ‘process’ led approach (‘Practical Payment Systems’) into their practice with considerable success. These research and consultancy interventions required both quantitative and qualitative data to be collected but also for the team conducting the research to engage and collaborate with senior management and employees as to establish the priorities and the appropriate measures so that successful outcomes could be delivered.