Answers to Exercises in the Book

The bar chart for each group looks like this. 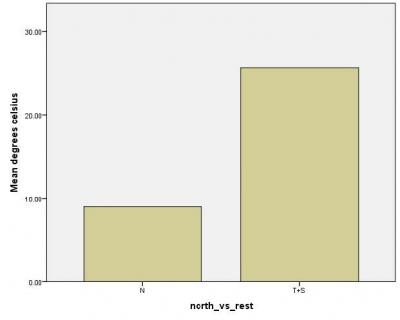 The SPSS output box plot for each of the two groups looks like this. 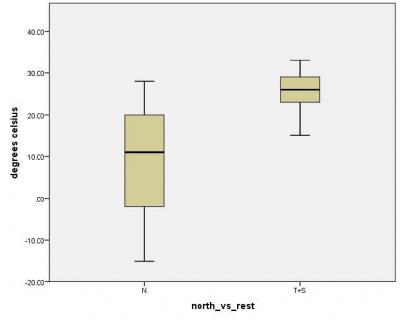 SPSS displays the following statistics for each boxplot: minimum, first quartile, median, third quartile, and maximum. The middle half of the data for each group (the area between the first quartile and the third quartile) is shown in the shaded areas of the boxplot (this is the ‘box’), while the solid bar inside the shaded box is the median. The largest and smallest values in each group are shown by what are sometimes called the ‘whiskers’.

Similar to the output from Exercise 10.1 (which showed the means), these boxplots show a big difference in the median temperatures of the two groups. Looking at the shaded boxes, we can also see that there is a bigger spread in temperatures for Northern hemisphere cities. The Southern and Tropical cities have much lower variation. There are extreme temperatures for both groups, as shown by the minimum and maximum scores marked with the whiskers in the two plots. For the Northern hemisphere, there are four cities (Dubai, Miami, Jerusalem and Tel Aviv) with a temperature which is higher than the median for the southern and tropical cities. Moscow is the coldest city in the Northern hemisphere, with a temperature that day of –15 degrees. For the Tropical and Southern hemisphere cities, the lowest temperature is Mexico City with a rather mild 15 degrees (at least for a Northern person). The hottest city is Bangkok with 33 degrees, just ahead of Mumbai with 32 degrees.

The chi-square value is 10.52. The p-level is 0.005 or 5 in 1,000. The odds of the null hypothesis being true are very small, and so we conclude that there is a gender difference in how people see the effect of job loss on the relationship with their partner.

The contingency table from SPSS shows the row percentages.

The bottom row shows for the company as a whole that there are almost the same number of men and women. The percentages within regions do differ quite a lot: there are more women than men in Europe and in North America, and there are fewer women than men in the other three regions. The lowest percentage of women is in Asia Pacific at 42.1 per cent, compared with 53.9 per cent in North America. The chi-square test is highly significant (χ2 = 441.82, df = 4, p < 0.01).

There could be many reasons for regional variations in the proportions of men and women employed within the company, although it is unlikely that there is any difference in the relative percentage of women and men from one region to another. It would be important to find out what jobs are being done by employees in the different regions, in order to check out the possibility that gender is related to the kind of work being carried out. Gender could also be related to qualifications or job level, so it would be useful to investigate regional gender differences in the qualifications that the company requires of its employees.

Note: Not all questions have answers, this is because some questions don't lend themselves to a clear correct answer - dicuss with you're tutor if you're not sure of your work on the questions not on this website.