1. What are the major functions of the nervous system?

The major functions of the nervous system are to maintain homeostasis by:

The central nervous system (CNS) is made up of the brain and spinal cord which act as the control centre for many of the parameters which are controlled through homeostasis. The sensory division of the nervous system consists of the special senses and the general sensory receptors and nerves which carry information to the CNS.

The motor division of the nervous system is made up of two parts:

3. Describe how nerve impulses are transmitted.

Neurons carry information by transmitting nerve impulses along the axon in a way that is comparable to electrical charges. This is known as an action potential. The impulse passes from neuron to neuron at a synapse or neuron to muscle fibre at a neuromuscular junction by chemical or electrical transmission.

Neurons may be myelinated or unmyelinated.

4. Describe in outline the major structural elements of the CNS and their functions.

The CNS consists of the brain and spinal cord and is composed of neurons and supporting tissue. They are made up of grey matter and white matter:

The nerve fibres are grouped in tracts or pathways. Two major tracts are:

Structurally, the brain is divided into:

The cerebral cortex is divided into lobes:

The spinal cord is an extension of the brain from the medulla with two main enlargements. The cervical enlargement (through the brachial plexus) provides neurons for the arms, and the lumbar enlargement (through the lumbosacral plexus) provides neurons for the legs. Below this, the cord narrows into a conical shape, the conus medullaris. Nerves resembling a horse’s tail (called the cauda equina) extend further down to the sacrum.

Spinal grey matter is set out in an H shape and is divided into ‘horns’; anterior, posterior and lateral. Spinal white matter surrounds the grey matter and is structured into three columns, the anterior, posterior and lateral columns. They are then subdivided into tracts, distinct sets of fibres going to or from the same place. The name of the tract indicates its path; for example, the corticospinal tract carries information from the cortex to the spinal cord.

5. How many cranial nerves are there?

What is the 5th cranial nerve called and what are its characteristics?

Which cranial nerve innervates the organs of the thorax and abdomen?

10th or vagus nerve: innervates organs of the thorax and abdomen. Major nerve comprising the cranial end of the parasympathetic nervous system.

6. What happens to motor nerves as they pass through the medulla oblongata? Where does this happen for sensory nerves? What is the significance of this?

7. What is a reflex arc? Illustrate this in a diagram

A reflex arc is when the nerve impulse is transmitted rapidly from the sensory neuron through the connector neuron to the motor neuron without going through the brain. Therefore, the reflex arc is an important protective mechanisms as it permits a more rapid response than if information had to go the brain and back. 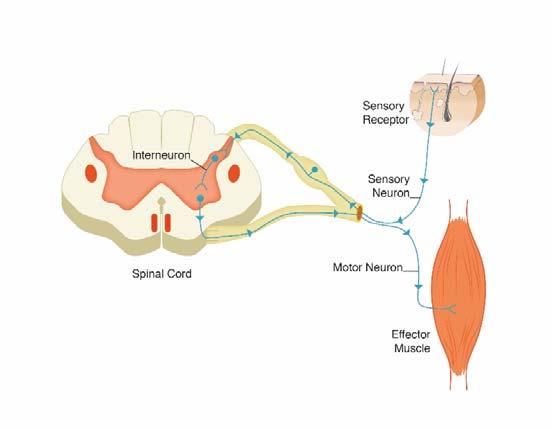 8. Briefly explain how information is transmitted to the central nervous system and represented in the cerebral cortex.

Information is carried by the sensory receptors into the spinal cord and up sensory pathways to the brain.

The autonomic nervous system is concerned with control of involuntary activity of the body. The effector organs are:

The autonomic nervous system consists of two branches: the Sympathetic and Parasympathetic Nervous Systems which normally act together to regulate activity of organs.

This part of the autonomic nervous system derives from the thoracic and lumbar sections of the spinal cord. The cell bodies of the nerve fibres going to the individual organs are in a chain of ganglia which run alongside the spinal column, with some in larger ganglia within the abdominal cavity.

As the effect of the sympathetic nervous system is to ready the body for action, it activates those organs which enable increased activity (e.g. the heart and respiratory system) while, at the same time, it inhibits the activity of those organs (such as the gut) which have no active part to play in sudden activity.

This part of the autonomic nervous system derives from the cranial and the sacral ends of the CNS. Four of the cranial nerves contribute to this, the major one being the vagus nerve. The cell bodies of the nerve fibres are in the wall of the organ being supplied or in a ganglion within the abdominal cavity.

10. Where is CSF formed and reabsorbed in the brain? How many fluid filled spaces are there filled with CSF? Why do we have CSF?

Fluid (CSF) is formed in the ventricles of the brain by the choroid plexus. It circulates in the central canal of the spinal cord and around the brain and spinal cord. It is reabsorbed in the arachnoid villi.

The CSF surrounds and cushions the brain and spinal cord by maintaining a constant pressure of the fluid. It supplies nutrients and removes waste products from the nerve cells.

Provide protection for the CNS.

o   The subdural space (a potential space) between the dura and the arachnoid mater.

o   The subarachnoid space contains the CSF, and separates the arachnoid and pia mater.

12. Briefly describe how blood is supplied to the brain.