Gene:  A section of DNA which codes for a specific polypeptide chain.

2. Outline how the information carried on DNA is transcribed into RNA and translated into proteins.

The two strands of DNA separate to allow formation of the single stranded messenger RNA (mRNA) molecule. The DNA which codes for a particular polypeptide molecule is transcribed into RNA, with each group of three bases in the DNA which code for an amino acid matched with the equivalent bases in RNA (with thymine in DNA replaced by uracil in RNA). The mRNA molecule moves out of the nucleus through the nuclear pores and links with a ribosome. The mRNA forms the template for translation into the polypeptide chain which becomes shaped into the protein. As the mRNA moves along the ribosome the amino acids coded for are attached to the growing polypeptide (protein) by transfer RNA (rRNA).

3. Describe the three Laws of Inheritance.

4. Draw a Punnett Square to illustrate the genetic outcome from parents one of whom carries a dominant gene for a particular characteristic. What is the common pattern of descent through generations in such conditions?

One parent carries a dominant gene for, e.g. Huntingdon’s disease. 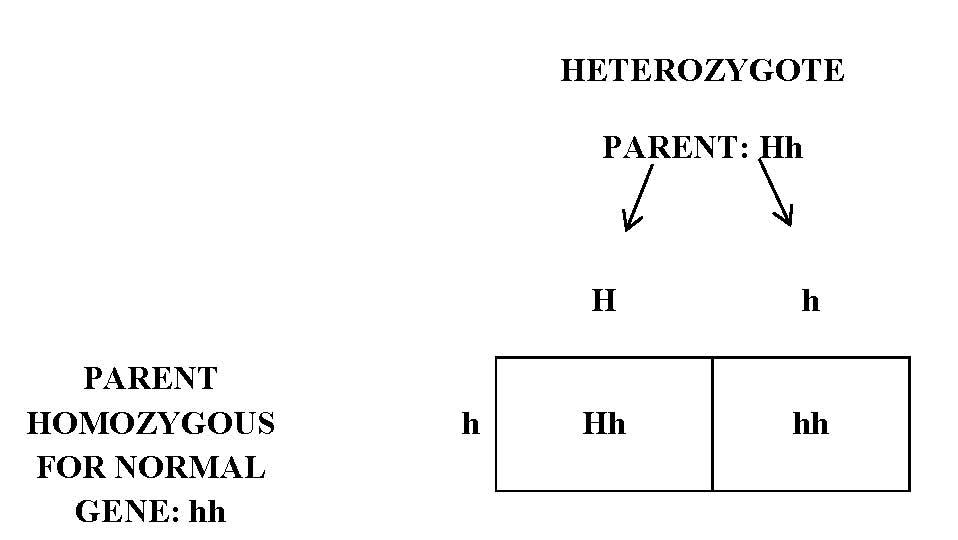 On average:     50% of offspring will carry one dominant gene.

Each baby has a 50% chance of carrying the dominant gene

The condition will normally appear in every generation.

5. Draw a Punnett Square to illustrate the genetic outcome from parents both of whom carry a recessive gene for a particular characteristic. What is the common pattern of descent through generations in such conditions?

Both parents are heterozygous for the abnormal gene, i.e. each carries one copy of the gene (small c) for, e.g., cystic fibrosis. 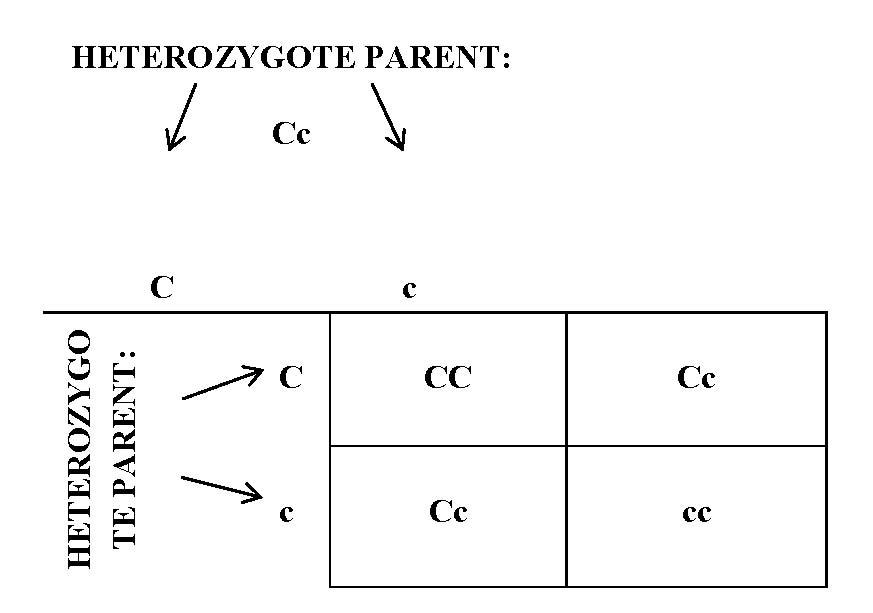 The condition appears randomly in the family tree.

The following three case studies are each followed by a number of questions.

Jane and David have been married for two years, and 18 months ago had their first child, a little boy named Michael (Mike for short). Mike seemed to be doing well at first but in his second year, his parents became worried as his walking is not developing as expected. He has been referred for genetic testing.

Jane’s mother had three siblings, including one boy several years older who she remembers as badly disa­bled and who died in his teens. She does not know what was wrong with him. Jane’s younger sister has not yet had any children, her older one has a boy (6 years) and a girl of 3 years without any symptoms. David’s family has no history of any serious disorders.

Jane and David have just been told by the paediatric consultant that Mike has Duchenne muscular dystrophy.

1. What is the mode of inheritance of Duchenne muscular dystrophy?

2. How likely is it that each further child by Jane and David will have the same condition?

3. Briefly discuss the chances that Jane’s younger sister will have a boy or girl affected with this condition.

4. How does this condition affect the individual concerned?

Weakness of the legs and pelvis and loss of muscle mass are the first symptoms which usually occur between 2 and 3 years, but may start earlier. Muscle weakness spreads to arms, neck and other areas. Enlargement of certain muscles and difficulties in standing and climbing stairs occur and muscle tissue is later replaced by fibrous tissue. As the child gets older he will need braces to help in walking and will become wheelchair bound usually by about 12 years. Further loss of movement and other signs and symptoms develop. He is likely to die in his mid-twenties.

My father, John, is 45 and is beginning to show signs of forgetfulness and clumsiness with some muscle twitching. Huntingdon’s disease runs in his family, his mother died of it and I am worried that he is develop­ing it. His older brother was tested for it and does not have it, but his younger sister with two children does carry the gene for the disease, although she has no symptoms. John has not been tested for the condition.

1. How is Huntington’s disease inherited?

Autosomal dominant, with high penetrance (i.e. most people with the gene will show the condition).

3. How can a family history be used with genetic testing to identify the risk of my brother’s children and extended family members developing HD? What are the potential difficulties involved for families.

A family history will provide information about the incidence of a condition which may be, or have been, HD. Genetic testing will enable living members of the family to have their status in relation to this gene to be identified. Those considering having children can now have In-Vitro Fertilisation (IVF) with Preimplantation Genetic Diagnosis (PGD) to identify an embryo which does not carry the gene and thus they will be able to have a child without the risk of developing this condition in later life.

Older members of the family may not wish to know whether or not they carry this gene because nothing can be done anyway. All that testing will do is confirm that they will not develop the condition or that they are very likely to develop it. Some will feel that they would rather not know. The other issue that could arise is considering preparation for caring for those who are likely to develop HD.

My uncle Alun (my mother’s brother) and his wife had a daughter 20 years ago who was diagnosed with cystic fibrosis and has recently had a heart and lung transplant to resolve her respiratory symptoms. Neither of my parents nor my two sisters have this disorder. My partner (Roger) and I (Jill) are considering having a baby but I am concerned about the risk of the child also having cystic fibrosis.

1. What is the mode of inheritance of cystic fibrosis and what proportion of the population carry the relevant gene?

Autosomal recessive. About one in 25 people of Northern European ancestry are carriers of this condition (with one gene) and about one in 2,500 to 3,000 babies are born with the condition (carrying two genes – one from each parent).

2. What is the risk that Jill carries the gene for cystic fibrosis?

1 in 4 of having the condition (she did not, thus risk eliminated);

1 in 4 of not having the gene for cystic fibrosis.

Thus she had a 2 in 3 chance of carrying this gene and because she passes one of her two genes at this site to her daughter, there is then a 1 in 2 chance that an abnormal gene is passed on.

3. How can Roger and Jill minimise the risk of having a child with cystic fibrosis?

Roger and Jill can both be tested for the abnormal gene. If only one of them carries it, any child they have may be a carrier but will not have the condition. It they both carry it, then any child has a 1 in 4 chance of having the condition. In this situation, they can have In-Vitro Fertilisation (IVF) with Preimplantation Genetic Diagnosis (PGD) to reduce the risk that the foetus will have the condition.