1. What is meant by the circulatory system?

2. What are the functions of blood?

Protection – against infection, clotting, exchange of water and solutes between plasma and interstitial fluid, regulation of pH and control of body temperature.

3. What are erythrocytes? Describe their structure and function.

Red blood cells shaped like slightly indented, flattened disks. They have no organelles and are nourished by diffusion. They contain haemoglobin, a protein–iron molecule that carries oxygen. The body contains more erythrocytes than any other type of cell, and each one has a life span of about 120 days. Erythrocytes are generated in the bone marrow through erythropoiesis.

4. Name the five types of white blood cells and identify their roles.

o   Neutrophils: Neutrophils engulf bacteria and cellular debris or use chemical agents to destroy them. The granules in the cytoplasm contain lysozyme and peroxidase which act as antibiotic agents. An increase in the number of neutrophils occurs in acute infections, certain malignant neoplastic diseases, and some other disorders.

o   Eosinophils: These are a type of granulated leucocyte that are readily stained with eosin. Eosinophils, normally about 1–3% of the total white blood cell count, are believed to function in allergic responses and in resisting some infections. They engulf antigen–antibody complexes, allergens and inflammatory chemicals. They can also weaken or kill parasites by secreting chemical agents.

o   Basophils: These are a type of granulated leucocyte that stain blue when exposed to a basic dye. Basophils normally constitute 1% or less of the total white blood cell count. They assist in the inflammatory response by secreting histamine, increasing blood flow to tissues as it is a vasodilator. They can also secrete heparin to enable leucocytes to be able to mobilise rather than being caught up in a clotting process.

o   Lymphocytes: These leucocytes contain no granules and normally make up about 25% of the total white blood cell count but increase in the presence of infection. Lymphocytes are key defence mechanisms for the body in that they can destroy cancer cells, cells that have a viral infection and cells identified as foreign. Lymphocytes occur in three forms: B-cells, T-cells and natural killer cells.

5. A 40 year old lady is admitted to hospital with acute confusion. She has a cannula in her left arm for fluid administration. In her confusion, she pulls the cannula out. What happens within her body to stop the bleeding and restore homeostasis?

When a blood vessel is damaged, bleeding is stopped through a series of stages in which platelets are vital. There are three stages to this process:

The extrinsic pathway is activated when proteins are released by damaged blood vessels and perivascular tissue. In this process, factor III combines with factor VII. In the presence of calcium, this activates factor X.

The intrinsic pathway occurs from components already in the blood. It is triggered when thrombocytes release factor XII (through degranulation), leading to activated factor XI, IX and VIII in that order, each triggering the next. Factor VIII activation requires the presence of calcium and platelet factor 3 (PF3). Factor VIII will lead to factor X activation too.

This stage starts with the activated factor X from both the intrinsic and extrinsic pathways. Factor X combines with factors III and V in the presence of calcium and PF3. What results is prothrombin activator. This converts factor II (prothrombin) to thrombin, which converts factor I (fibrinogen) to fibrin. Fibrin reacts with factor XIII and calcium to produce the structural framework of the blood clot. The thrombin also speeds this process up by accelerating the production of prothrombin activator by interacting with factor V.

Erythrocytes are grouped by the presence or absence of specific surface antigens on their cell membranes. These are known as A, B and O. Erythrocytes have:

Type A blood – plasma has anti-B antibodies which attack Type B surface antigens.

Type O blood – plasma has both anti-A and anti-B antibodies.

Type AB blood – plasma does not have anti-A or anti-B antibodies.

Cross reaction will occur when an antibody meets its specific surface antigen. For example, an anti-A antibody that encounters surface antigen A will cause the erythrocytes to clump/breakup. These clumps and fragments can occlude small blood vessels. Cross reactions/transfusion reactions can be prevented by ensuring that the blood type of the donor and recipient are compatible.

7. Describe how the cardiovascular system contributes to homeostasis.

8. Name the components of the cardiovascular system and describe their main functions.

The key task of transport requires the CVS to have the following:

9. Using the diagram below illustrate the pathway taken by the blood through the heart. 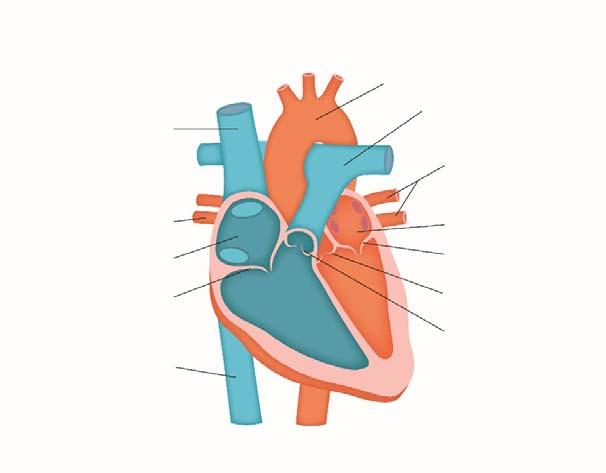 10. What is blood composed of?

11. Where are red blood cells formed?

Red bone marrow found in the ends of the long bones, flat bones and irregular bones.

12. What is the stimulus for erythropoietin production?

This is controlled through negative feedback. A fall in oxygen level stimulates the release of a hormone from the kidneys called erythropoietin. This hormone increases the formation of erythrocytes. See Figure 12.1.

13. Describe the three layers of the heart.

14. Label the diagram of the heart in question 9 to identify the components of the conduction system of the heart.

15. Describe how the conduction system in the heart works.

The pacemaker of the heart is the sinoatrial (SA) node, a specialised group of autorhythmic cells located in the wall of the right atrium. It is here that an electrical impulse is initiated and this impulse spreads across the rest of the atria, triggering the smooth muscle of both atria to contract at the same time. The result of this action is that blood is pumped into the ventricles. The AV node is stimulated by the impulses arriving from the SA node across the atria. Here at the AV node there is a short delay in conducting this impulse further. This allows the atria to finish contracting which gives the ventricles time to fill with blood from the atria. Once this delay is over, the nervous impulse is carried from the AV node down to the ventricles through the atrioventricular bundle (AV bundle, often referred to as the bundle of His). This specialised nerve tract divides into the right and left bundle branches and passes down the septum dividing out to each ventricle. These branches then subdivide further to cover more surface area, and these are known as the Purkinje fibres. The Purkinje fibres reach out over all of the ventricles and trigger the smooth muscle of the ventricles to contract, pumping blood out to the lungs and the rest of the body.

16. What are cardiac output, stroke volume and heart rate?

17. What is blood pressure and how is it created?

Baroreceptors, which respond to changes in pressure, and chemoreceptors, which respond to changes in the concentration of chemicals, are found within the CVS. They measure changes in pressure and chemical substances such as carbon dioxide and oxygen in the blood. Chemoreceptors largely only respond to chemicals affected by respiration (O2, CO2 and H+). High CO2 concentration and low O2 concentrations suggest to the cardiovascular centre, located in the brain stem that gaseous exchange is suboptimal. Sympathetic stimulation will relay to the SA node to increase the heart rate (and the rate of breathing to increase gaseous exchange) to compensate. An increase in heart rate will increase cardiac output and therefore blood pressure. In contrast, if O2 concentration is high or the CO2 concentration is low then parasympathetic stimulation will relay to the SA node to slow the heart rate, dropping cardiac output and therefore blood pressure.

19. Draw a diagram to represent the endocrine control of blood pressure.